Anyone looking to get a new reel will be comparing the different reels available in the market.  Conventional reels and spinning reels are some of the most popular reels, and most people will have a hard time determining which one is the best reel. This is because they can be used for a wide range of applications.

If you understand your application well, you will have an easier time choosing between the two. Additionally, getting advice from experienced anglers will give you an idea of what will work best for you, depending on their experiences. Keep reading and identify the difference between the two reels.

Conventional reels are very common among anglers eyeing big and robust fish. They work perfectly in harsh conditions and saltwater applications. Usually, they are used in applications where other reels cannot stand.

These reels come with a level-wind line retrieve, and they have a higher line capacity compared to other fishing reels. They can come in one speed or two- speed the choice will depend on every angler. Their sizes also vary from those of other reels. Small conventional reels will be used for fish that are less than 50 pounds; mid-sized conventional reels are ideal for fish ranging from 25 to 200 pounds, while large conventional reels deal with fish exceeding 200 pounds.

A spinning reel is the most versatile and probably the most widely used fishing reel. Every angler has used a spinning reel at least once in their career. Spinning reels are used for light applications, and they will be used with lighter tackle. They have a stationary spool with a line wound onto the spool.

These reels are easier to use and also easier to learn. They are the most recommended for beginners due to their reliability and ease of casting. Additionally, they are less expensive compared to other fishing reels. They sit under the rod, and most of their handles can be interchanged to suit the anger’s hand orientation.

The spool of a conventional reel is cylindrical, and it revolves when the handle is cranked, releasing the line. On the other hand, the spinning reel has a stationary spool with a line wound on it.

The conventional reel is located above the rod, while the spinning rod sits below the rod.

Conventional reels are a little harder to use, and they are complex. This is because they are used for more complex situations; on the other hand, spinning reels are simpler, reliable and easier to use; they are the most recommended reels for beginners.

Conventional reels are the go-to reel for anyone targeting saltwater species and the largest and most vigorous species. Spinning reels, on the other hand, are built for smaller species. They will excel mostly in freshwater applications and light saltwater applications.

On a spinning reel, the handle is interchangeable so you can change it to suit your hand orientation and meet your needs. In contrast, the handle of a conventional reel cannot be interchanged if it’s on the right side; it remains there and vice versa. 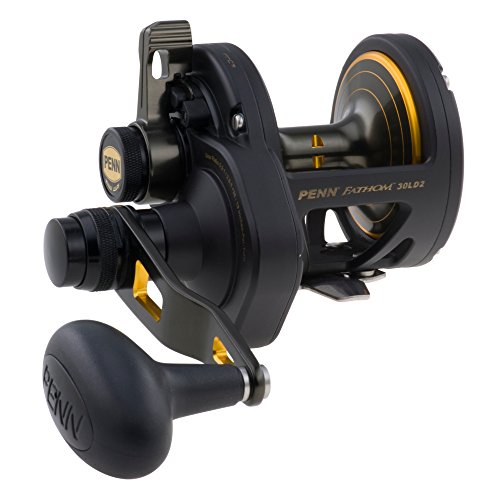 Product
Product
Penn Fathom Lever Drag
PENN Battle II & III Spinning Fishing Reel
Spool
Spool
The spool is revolving
Spool is stationary
Size
Size
Generally, conventional reels are bigger
They are smaller
Price
Price
They are a little expensive
They are quite affordable
Handle
Handle
The handle cannot be interchanged
The handle is interchangeable
Location
Location
Located above the rod
Sit below the rod
Drag
Drag
They have a lever drag or star drag
They only have a lever drag
Application
Application
Perfect for heavy saltwater applications
Used for freshwater applications and light saltwater applications
Expertise
Expertise
Used by tournament level and the most experienced anglers.
Ideal for beginners
Check Conventional Reels
Check Spinning Reels

How do I know if My Reel is Conventional or Baitcasting?