Millions of anglers worldwide use Shimano fishing reels, but not many seem to know where these reels are made and which country Shimano is located.

Shimano reels, particularly high-end models, are among the best, if not the best, reels inthe world.

Despite the common belief, Shimano reels are not manufactured in the USA but Japan. Here, at the company’s headquarters in Sakai, all of Shimano’s high-end, premium reels are manufactured and shipped out to the world.

Shimano is a successful company. Well, here is an article about Shimano Fishing reels.

initially, all Shimano’s high premium fishing reels, including the Stella series and most of their baitrunners, are made in Japan. Also, their second-tier reels are instead produced in other countries.

Surprisingly, most anglers think that Shimano reels are made in the US. I believed that until I found out that Shimano was founded in Japan.

In 1921, a young man named Shozaburo Shimano established a small company called Shimano Iron Works in the Japanese city of Sakai, where the company’s headquarters have remained to this day.

And that holds the affirmation that high-end reels are made in japan while lower-end reels models are produced in other countries.

Are Shimano reels made in the USA?

The first Shimano spinning reel series, the 1971 DUX, was an initial instant success in Japan, Europe, and the US. However, after that, Shimano had a significantly easier time establishing itself as one of the world’s leading fishing reel manufacturers.

Today, where Shimano reels are made usually depends on the model.

High-end premium models are made in Japan, while other, more basic models are manufactured in Malaysia. Some series are even produced in Singapore.

Which Shimano reels are made in Japan?

Shimano models such as the Stella and Aero are some of the baitrunners made in Japan, while other models, especially spinning ones, are made overseas.

Shimano reels made in Japan, of course, are better, but these models cost a fortune, and even if those and some entry-level ones were manufactured in the same place, the high-end ones would still be better.

Are Any Shimano Reels made in China?

When it comes to China, most lower-priced Shimano reels, costing up to $200 or so, are made here.

The truth remains that the design, quality control, and high standards, in general, are still Japanese. Their factories have nothing to do with those business aspects and competitions from other countries, and they are just concentrating on making the reels in a way that Shimano requires.

However, anglers who have fished with plenty of Shimano reel models can tell you that the high production quality and product care has spread from Japan and into those countries and manufacturing factories as well!

Is any Shimano Reel made in Indonesia?

Most countries like Indonesia often have a terrible reputation for manufacturing and product quality.

Japan is one of the rare places where new technologies are being developed daily, and it becomes easier to produce the new innovative Shimano reels.

Therefore, regardless of where your Shimano reel has been made, the quality is usually there. And by taking good care of it, it can virtually last you forever.

This sounds like the most challenging question because we know all of Shimano’s fishing reels to be incredible pieces of equipment.

However, we can consider affordability, quality, and durability when writing this part.

Therefore, we landed on the following;

If you are amongst the millions of anglers in Europe, you can line with me that Shimano is famous today because most anglers have turned to predator fishing.

Shimano baitcasting reels cast amazingly, are exceptionally smooth, and easy to handle and control, which is especially important if you’re new to baitcasters.

These reels are equipped with a modern digital control braking system that utilizes a microcomputer to monitor speed spool, making it more reliable for bass, walleye, zander, and even smaller pike.

Shimano’s most standard baitcasting reels are the Curado DC and the  Shimano SLX  series. 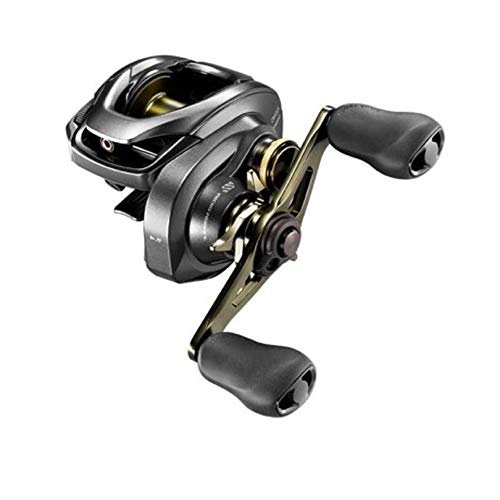 Curado DC is a Low-profile baitcasting freshwater fishing Reel, and it’s the most advanced reel of all Curado models.

Well, Shimano SLX offers a true workhorse in all the most essential bass fishing with Hagane body for solid performance without any tilting or warping despite a lightweight body.

Your choice of the fishing reel should be based on your preferences, style of fishing, type of fish you’re targeting, and a reputable brand.

As you have probably figured out by now, the Shimano Spinning reel brand offers reels that share several noteworthy features.

Shimano spinning reels are reliable and incredibly lightweight, smooth, and handy with superb design and unbelievable strength. They’re designed to endure and conquer the most blistering runs and powerful fish.

These reels offer high-performance premium features at an unbeatable value, with the reels mainly for fishing freshwater, especially for catfishing.

Shimano Conventional reels build a superb reel for the avid fisherman and professional alike but not for the faint-hearted but worth every penny.

Conventional reels were purpose-built to take advantage of modern braided lines such as PowerPro, Hollow Ace and shorter fluorocarbon leaders.

The reels are highly robust reels that can take a beating from any wild carp that happens to pick up your bottom bait.

They can also be the best pick for trolling, dead baiting for pike, or bottom fishing for catfish.

The best Conventional Shimano reels are Shimano Talica and the Shimano Tiagra.

Shimano Talica is a reliably excellent casting reel with an ultra-smooth and powerful drag system to handle long battles.

Also, it comes in 11 different sizes to tackle a variety of offshore fish, from the football size tuna to record-setting class pelagic species.

Where are Shimano Curado reels made?

Curado is loved by many anglers worldwide, and some of them have been using their reels for years. Older Curados were made in Japan; today, the production is mainly based in Malaysia.

I can confirm that Curado features the latest Shimano technology, such as super smooth, efficient, durable MicroModule gearing. It is built on its legacy as the ‘go to’ baitcasting reel for fresh and saltwater action.

Where are Shimano Stradic reels made?

Shimano Stradic was initially made in Japan before, and most anglers, who have been using these reels for years, will tell you that new ones made in Malaysia are even better for quality and performance.

Where are Shimano Calcutta reels made?

The Calcutta series of reels represents the core of Shimano’s quality, versatility, dependability, and long-term values.

Shimano Calcutta is made in Malaysia, although some of its parts are made in several factories in China.

Where are Shimano SLX reels made?

Shimano SLX was initially made in Japan, but due to increased technology and innovation, Malaysia has become a significant Shimano SLX.

It got Shimano’s Hagane body for solid performance without tilting or warping despite a lightweight body.

Where are Shimano Stella reels made?

The Shimano Stella is the best ultralight spinning reel on the entire market, and there is not a single model or brand that can come close to it.

Shimano’s premium fishing reels like the Stella series are made in Japan. However, their second-tier reels are instead produced in other countries.

Now that you know where Shimano fishing reels are made and how it affects them in terms of quality, pricing, design, and innovation, no matter the country of origin, Shimano still is the best reel brand in the world.

If you are for the top product, you can choose among models made in Japan, although they are costly. Sometimes the price may be very high, but in my opinion, these reels are worth it.

Shimano invests in new technologies and constant improvement from entry-level to high-end reels. That is one of the many reasons why millions of anglers love this brand.

Can you Use a Baitcaster for Catfish? (Here is the Answer)